…we often learn of tragedies and this can trigger PTSD. For example, the collapse of the World Trade center buildings created a trauma that spiraled here through Atlanta GA and throughout the nation with Manhatten as it’s epicenter.

Does counseling help PTSD and it’s related symptoms? Indeed it does. Counseling is one of the most effective treatments for PTSD. It is one of few mental disorders that can develop even in the absence of genetics or family history. PTSD is Posttraumatic Stress Disorder.

1) Experienced a horrific or terrifying event. In the aftermath:
2) Easily Startled.
3) Hypervigilance.
4) Nightmares or flashbacks.

How Do I Know If I Suffer With PTSD

You will only know for sure through assessment by a mental health professional. Many of the symptoms can be part of a different diagnosis. Still, there are ways of determining whether you need to rule out a diagnosis of PTSD.

Examples of Horrific and Terrifying Events

There are three categories of horrific events:

Victims are rape survivors, near death experiences such as auto accidents and natural disasters, surviving a terminal illness, surviving child abuse, combat survivors and other. Notice all are first hand experiences. Also impacting are events that are witnessed such as death or assault. Finally,

we often learn of tragedies and this can trigger PTSD. For example, the collapse of the World Trade center buildings created a trauma that spiraled here to Atlanta GA and throughout the nation with Manhatten at it’s epicenter. I have treating individuals with PTSD in my Atlanta practice who formerly worked in the WTC towers.

This symptom occurs more frequently with survivors of assault. Loud noises, being approached from behind- these are common triggers for a startle reaction.

Hypervigilance is defined as a state of being overly watchful of one’s surroundings. Sometimes even to the point of exhaustion. Again, hypervigilance is most frequently observed with assault survivors. In the case of automobile accidents, hypervigilance usually only occurs while driving a car.

Sometimes the traumatic event is relived or can replay like a video in one’s mind. This can be a disorienting experience. Sometimes nightmares of the event can be so vivid the individual awakens needing to orient themselves to their surroundings.

A diagnosis of PTSD must be made by a professional. The symptoms need to be considered together as they could be related to a different diagnosis such as depression. If you are concerned about anxiety related to PTSD, you may call me to schedule or make an instant appointment through my web scheduler.

You deserve a former licensing board president on your side. 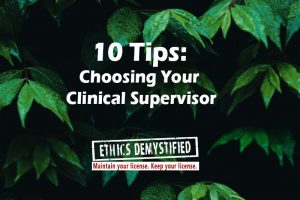